The work on texture characterization and classification has considered two different approaches.

The objective is to define a series of simple binary classifiers to discriminate one class of textures against all others. These simple binary classifiers are based on the identification of relevant features that are extracted using transformations such as wavelets, shearlets, total variations, and local binary patterns, which are applied after a texture-cartoon separation.

Once the relevant features are identified, a Support Vector Machine is used to determine the threshold in the functional that allows maximum discrimination between the classes. 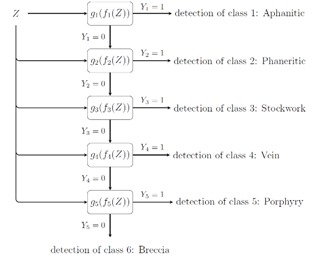 The simple binary classifiers are combined in a sequential classifier.

The approach was designed over a simplified database of 96 images (128 x 128 pixels), with 16 images for each one of the 6 texture classes: aphanitic, phaneritic, porphyry, stockwork, vein, breccia. In this setting, a success rate of 75.3% matching was obtained.

A pilot test was then prepared over a real drillhole dataset, where photographs for 1200m were available from a porphyry copper deposit in Chile. From these, 150m were used to extract about 14,000 images (128 x 128 pixels in size).

326 images were classified in one of the six categories by experienced geologists. This constitutes 2.34% of the total database. The classification approach was applied, obtaiing a 64% match over the validation data. The misclassified cases were analyzed and images were pre-processed to improve the classification success. A simple filtering approach and normalization of the images (in terms of brightness and contrast) were applied. The success rate over the validation set raised to 84.8%. 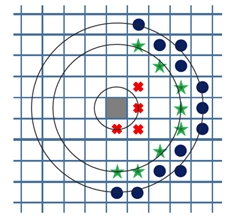 The image shows the 24 points vector used to summarize the variogram map, by considering only 4 points at lag 1, 8 points at lag 3 and 12 points at lag 4, covering different distances and angles. This implies a reduction in dimensionality of the original variogram map made of 441 values (21×21 lags) to only 24 values.

A further improvement of this is to consider the distribution of squared differences for the lags in the compact representation, instead of the average (as used in the variogram map). This implies that the variability of the variogram information from different zones of the image is accounted for. The distribution of squared differences for each one of the values (lags) of the compact representation of the variogram is characterized with its probability density function (pdf).

The method was applied to several cases, with excellent results.

Currently, research is focusing on improving the methods described previously, as well as exploring an unsupervised approach to cluster textures based on different features. These features have been explored in the research previously described, and include: continuity features, object extraction, morphological features, transform-based responses. The goal is to characterize the images through these features and apply a clustering scheme to discriminate them based on the feature vector values. These materials could then be correlated to metallurgical tests to be used as proxy for geometallurgical domaining.